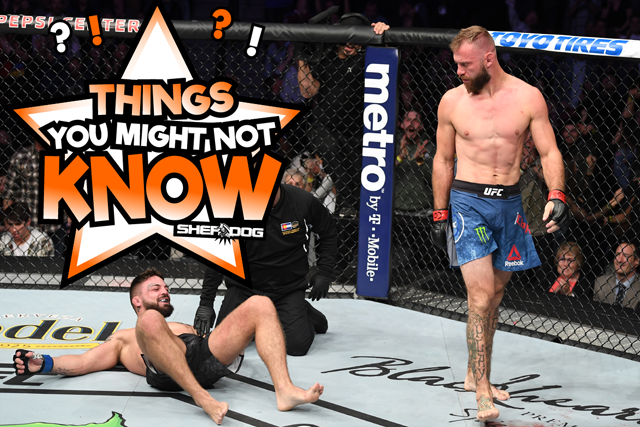 You can sign up for a free seven-day trial of ESPN+ right here, and you can then stream UFC on ESPN+ 1 live on your computer, phone, tablet or streaming device via the ESPN app.

Donald Cerrone (34-11, 1 NC) is a veteran mixed martial artist that has been fighting for the Ultimate Fighting Championship since 2011. Following 10 bouts at welterweight, 35-year-old Cerrone will move back down to lightweight when he locks horns with Alexander Hernandez at UFC Fight Night 143, which takes place at the Barclays Center in Brooklyn, New York, on Jan. 19.

As fight day approaches, here are five things that you might not know about the popular pugilist they call “Cowboy”:

He has the most wins in UFC history.

Cerrone has had his hand raised on 21 occasions in the UFC’s famed Octagon. He broke the promotion’s record for the most wins in Nov. 2018, when he submitted Mike Perry in the first round at UFC Fight Night 139. “Cowboy” also has most finishes in UFC history with 15.

He started out in kickboxing.

While in high school in Colorado, the young Cerrone’s athletic pursuit of choice was bull riding. He did not commence combat training until the relatively late age of 20. Initially, he trained in kickboxing but soon transitioned to muay Thai. His accolades include winning the 2006 S-1 Muay Thai U.S. Lightweight Tournament Championship and the Dominion Warrior Muay Thai World Lightweight Championship that same year. Across 29 muay Thai and kickboxing bouts, Cerrone never tasted defeat, and ended 18 of those contests by knockout.

For a man who named his son Danger, it’s not surprising that Cerrone is an avid fan of extreme sports. He has dabbled in bull riding, base jumping, diving, climbing and wakeboarding. However, the New Mexico ranch owner has not escaped unscathed. His injuries include breaking his back twice and losing a portion of his stomach and intestines following a near catastrophic 60-foot jump. His thrill seeking has not always gone down well with UFC top brass. In 2012, “Cowboy” was considering riding a bull on the PBR tour, but he claimed that his Dana White vetoed the idea.

Half of his wins have been by submission.

Cerrone’s muay Thai-based striking game is held in high regard, and he’s often perceived as a fighter whose preference is to engage his opponents on the feet. However, 17 (50 percent) of his victories have come via submission while only nine (26 percent) have been via knockout. Cerrone won his first seven professional mixed martial arts matches by submission, five of them by triangle choke.

He is a very active fighter.

The fact that Cerrone has the most wins and finishes in UFC history is a side-effect of his incredibly active schedule, which is something of a rarity in today’s MMA world. He made his UFC debut back in Feb. 2011, at UFC 126. To date, he has fought 30 times for the Las Vegas-based promotion. This frenetic fighting itinerary has meant that “Cowboy” often has little in the way of downtime. There was just over two months between beating Evan Dunham at UFC 167 in Nov. 2013, and his first round KO of Adriano Martins at UFC on Fox 10 in Jan. 2014. Cerrone’s shortest layoff was a mere 15-day turnaround he had between toppling Myles Jury at UFC 182 on Jan. 3, 2015, and his decision win over Benson Henderson, at UFC Fight Night 59 on Jan. 18.