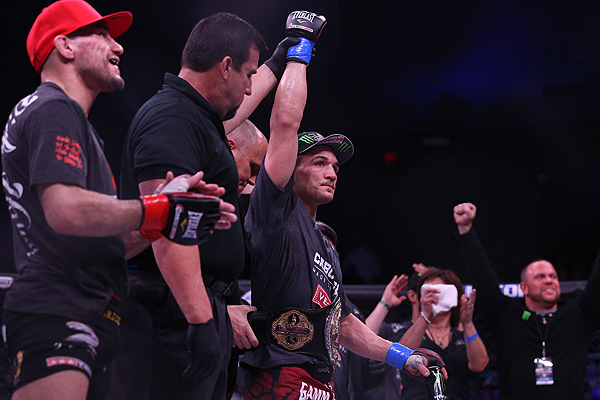 What did you think of Bellator’s debut on Spike? Tell us below in the comments section. | Dave Mandel/Sherdog.com


Finally, the anticipation was over.

From ESPN Deportes to MTV2 to the MMA-heavy platform of Spike TV, Bellator Fighting Championships is all grown up.

Bellator debuted on the men’s network Thursday night to much hype, following huge advertisement campaigns on ESPN, CraveOnline.com and other big platforms. According to a report from Forbes, no less than 50 sponsors were on board for the promotion’s upcoming season.

Here’s how the MMA community reacted to Bellator’s Spike and Season 8 debut on Twitter:


Up next, Seth Petruzelli and Jacob Noe. How does this guy keep weaseling his way into main events?


Is it me or is Neil Melanson morphing into Wes Sims?


Dominant performance by Michael Chandler. Am I overlooking someone if I say he's the best fighter not in the UFC? Hawn got legit beasted.


jay hieron is the only fighter to fight in Bellator, SF, UFC, WEC, IFL and Affliction


Never thought I'd see my Twitter feed dominated by the two headed monster that is Bellator and Oprah.


Curran's forehead is marked and bruised -- from those headbutts he's been landing so effectively.


@robnashville I liked Newton's bull choke transition the most. "Wait, this probably hurts more if I do this."


Ah, the old bulldog choke-to-no-hooks rear-naked choke transition. What's up Pancrase in 1995. Newton forgot his spats and boots, though.


Never been to an MMA fight but tonight, @jaymewes & I are heading to @bellatormma! See if you can spot us in the crowd on @spiketv at 9pst!


Am I hearing things, or did a Bellator commentator just call Antonio McKee an MMA legend?


Emanuel Newton's corner: "Hey, where's the water? Oh well, too late!" How do you lose the freaking water?


Do people who have never seen #MMA know they don't light the fighters hands on fire before they enter the cage? #Bellator