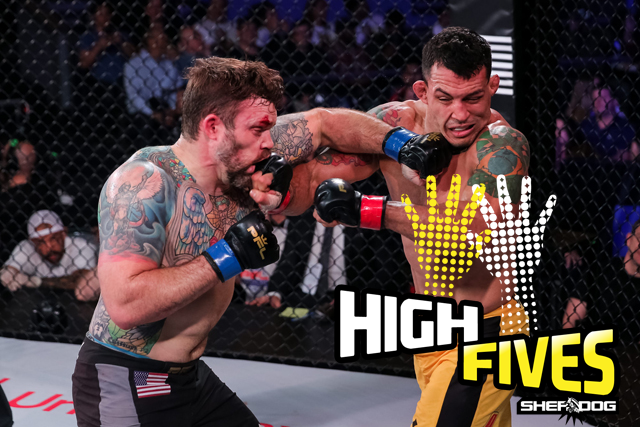 The long New Year’s weekend proved to be a real treat for mixed martial arts fans and not just because of UFC 232. The Professional Fighters League on Monday hosted its six tournament finals inside the Hulu Theater at Madison Square Garden in New York. Over in Japan, the stacked Rizin Fighting Federation 14 card, also on New Year’s Eve, featured a number of entertaining bouts, including two title fights with emphatic finishes.

GOODNIGHT GUILLOTINE … The PFL welterweight final was a showdown between Russian Magomed Magomedkerimov and Hawaii’s Ray Cooper III. The Hawaiian came out aggressively, as he looked to close the distance and land heavy punches on his taller opponent. Magomedkerimov enjoyed some success with a variety of kicks that were effective in keeping Cooper at bay. In the second round, a standing clinch battle culminated in the Russian grabbing hold of the Hawaiian’s neck. When Cooper dropped to his knees, Magomedkerimov pulled guard and tightened the winning guillotine choke, which forced the Hawaiian to tap at the 2:18 mark. In becoming the PFL welterweight champ, Magomedkerimov earned a $1 million-dollar check and upped his record to 23-5. Meanwhile “Bradda Boy,” now 17-5, saw his four-fight unbeaten streak with the PFL come to an end.

BEATDOWN … Brazil’s Vinny Magalhaes and America’s Sean O'Connell clashed in the PFL light heavyweight final. In the first stanza, the longtime Brazilian jiu-jitsu black belt took O’Connell’s back, secured a body triangle and proceeded to rain punches. Still, O’Connell survived. In Round 3, an increasingly fatigued Magalhaes was victimized by O’Connell, who poured on the pressure with heavy punches on the feet and on the ground. Prior to the commencement of Round 4, Magalhaes’ corner retired requested that the fight be stopped. In victory, O’Connell claimed the PFL light heavyweight title and improved to 21-10. With the loss, Magalhaes fell to 18-10.

GUILLOTINE GLORY … The Rizin 14 headliner was a bantamweight title fight between the promotion’s inaugural champion Kyoji Horiguchi and reigning Bellator MMA bantamweight titleholder Darrion Caldwell. For much of the first two rounds, Caldwell utilized his strong wrestling skills to ground the Japanese pugilist and control him on the mat. However, the American was unable to inflict much damage. In the third frame, Horiguchi found himself on his back in Caldwell’s guard. From there, he caught a hold of his rival’s neck and kept squeezing until Caldwell succumbed to the guillotine at the 1:19 mark. With the finish, Horiguchi defended his title and moved to 26-2, while “The Wolf” dropped to 13-2.

ATOMWEIGHT ARMBAR … Also at Rizin 14, Ayaka Hamasaki and Kanna Asakura vied for the inaugural Rizin Fighting Federation atomweight crown. In the first stanza, Hamasaki dominated proceedings on the feet. Late in the second round, Asakura came close to securing a takedown, but Hamasaki managed to land in side control and catch hold of her adversary’s left arm. Asakura attempted to defend by stepping over Hamasaki but ended up on her back and trapped in an armbar, which gave her no option but to quit. The official time was 4:34. In seizing the atomweight title, Hamasaki improved to 17-2. Asakura slipped to 13-3.

Gabrielle Garcia Tapped Barbara in 1R
where are the haters now ? #Rizin14 live on @FiteTV pic.twitter.com/qNXFaw55AA

GRAPPLING GOLIATH … The Rizin 14 card included a 225-pound women’s bout between fellow Brazilians Gabi Garcia and Barbara Nepomuceno. Garcia, a BJJ world champion, wasted little time in taking down the kickboxer. From top position in side control, the grappler easily secured the fight-ending keylock. Her opponent had no defense and surrendered at the 2:39 point of the first round. With the win, Garcia (6-0) kept her unblemished record intact. Meanwhile, Nepomuceno having lost her MMA debut, is now 0-1.